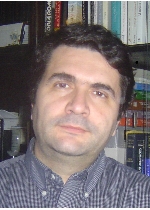 Biography
George V Popescu is an Assistant Research Professor at the Institute for Genomics, Biocomputing and Biotechnology and an adjunct faculty at the Biochemistry, Molecular Biology, Entomology and Plant Pathology department. Over the past 15 years he has contributed significantly to major genomics and proteomics projects, first as a postdoctoral research associate and later as a senior scientist. He started his research career in data analysis and information engineering. At doctoral level he specialized in computer modeling and simulation, graduating with a thesis elaborated from research contributions in an NSF sponsored biomedical project. His research experience was significantly broadened at the IBM TJ Watson Computer Science Department where he has worked, from 2001 to 2004, in research projects on network modeling, system analysis and optimization. His education was completed between 2004 and 2006 with a postdoctoral training stage in the laboratories of Dr. Michael Snyder and Dr. Sherman Weissman at the Center for Excellence in Genomic Sciences at Yale University. Here he contributed to projects on chromosomal copy number variation, SNP identification and association, DNA methylation pattern analysis, signaling networks inference as well as to the development of novel high-throughput protein microarray assays for protein interaction networks prediction. A significant contribution was the development of a new method for estimation of chromosomal breakpoint’s genomic coordinates and for detection of copy number variation from comparative genomic hybridization (CGH) data. Other key contributions at Yale MCDB were the optimization and development of protein micro-array designs and the analysis of protein-protein interactions to identify signaling networks in plants.
His recent work focuses on predicting biological system’s behavior under non-stress or stress conditions using the systems biology models of immune response circuitry. In an ongoing NSF-MCB project, he investigates the role of controlled proteolysis in signaling circuits that enable plants to withstand oxidative stress. He analyzes how two oligopeptidases TOP1 and TOP2 contribute to the redox proteome phenotype. His work uncovered new information on the impact of TOP1/TOP2 on the composition of the Cys-oxidized proteome in the early stages of the ETI and in redox signaling.
Research Interest
My research focuses on computational approaches to study biological networks and processes in order to understand evolution and dynamics at the molecular and cellular levels. Using system analysis methods, I seek to analyze the properties of biochemical networks, infer protein interactions and to study the dynamics of signaling networks. My research interest is in developing high-throughput assays for performing large-scale genome and proteome analyses and in designing novel computational modeling and simulation tools for genomics and proteomics studies. A key genomics contribution was the development of new computational method for the analysis of chromosomal variations leading to developmental diseases. I have discovered small copy number variations in the human genome and mapped large deletions and duplications associated with developmental diseases. Another contribution is the discovery of the complex structure of the MAPK signaling networks. Recently I have developed a novel network tomography method that is generalizable and could effectively address current challenges in the study of host-pathogen interaction networks. Another current research direction focuses on gaining a predictive understanding of cellular decisions during cellular response to stress. By developing models of cellular circuits responsive to plant stress factors, I am uncovering the cellular functions of key components and exploring their roles in redox and immune response pathways. Looking forward, I would like to focus my research on the study of cellular networks in order to understand their structure, dynamics and evolution.
Hobbies
Violin, chess, hiking.