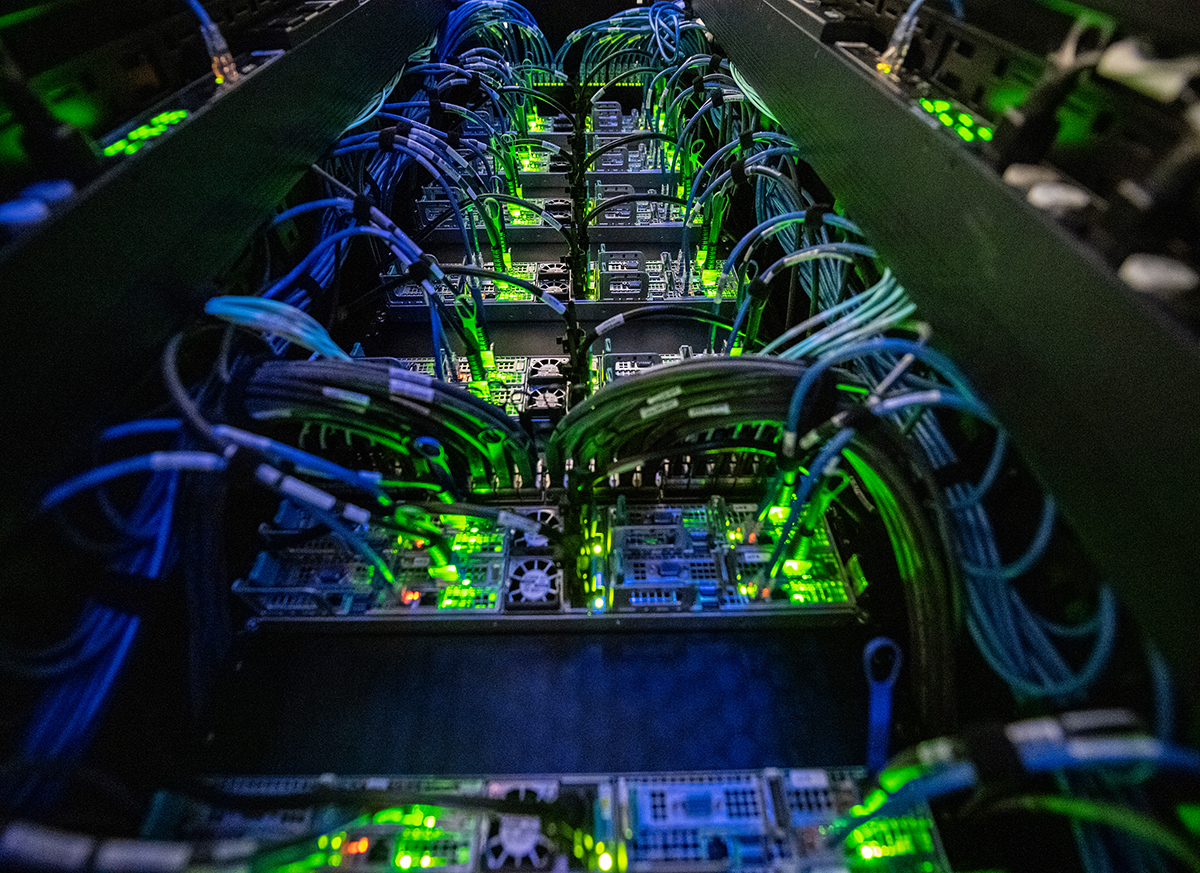 Data collected by drones is processed through MSU's Atlas computer.
A high-performance computing project at Mississippi State University aims to advance precision agriculture and benefit farmers. Researchers hope to use data obtained by drones to help farmers improve production by helping them quickly address problems such as plant diseases, pests and water stress.

The Advancing Agricultural Research through High-Performance Computing project is a collaborative agreement between Mississippi State University and the USDA-Agriculture Research Service. Robert Moorhead, MSU professor and director of its Geosystems Research Institute is the three-year project's principal investigator.

The partnership is powered by "Atlas," a high-powered system installed at MSU's High Performance Computing Collaboratory in 2020. 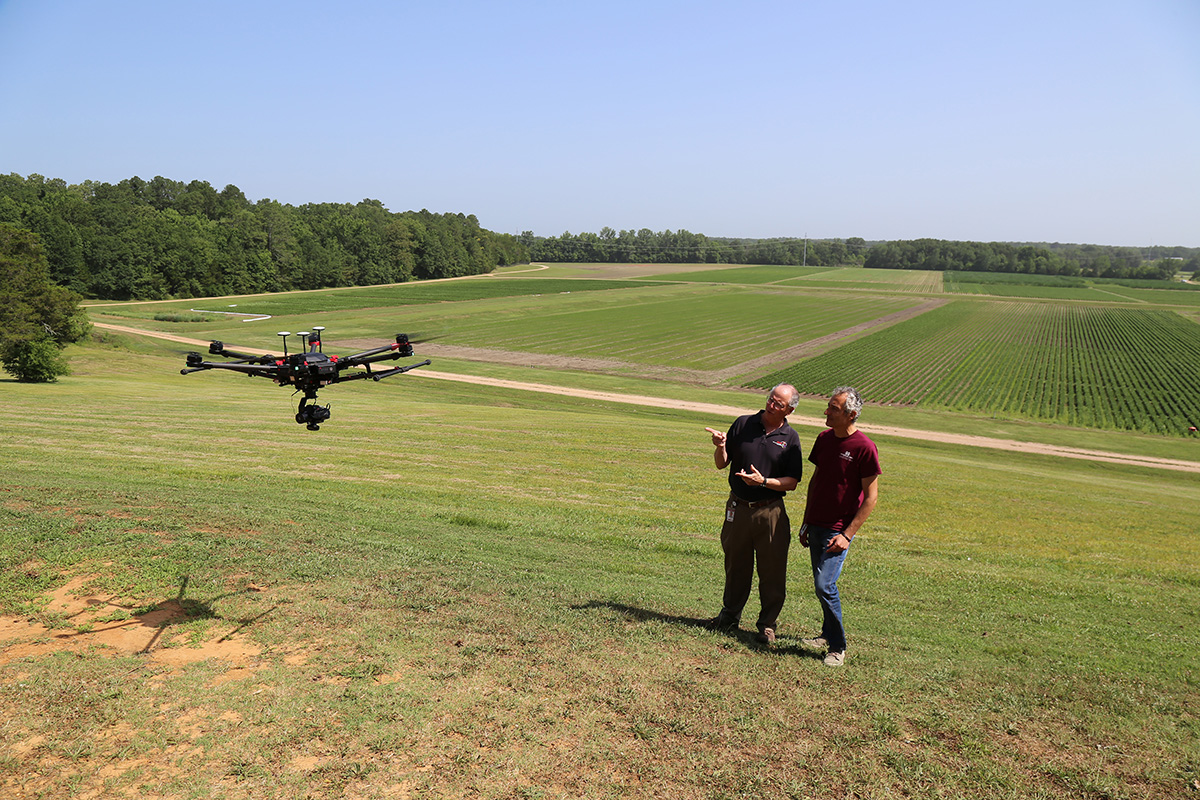 Robert Moorhead, MSU professor and director of its Geosystems Research Institute at Mississippi State University (left) and Alessandro Matese, a visiting scholar from Italy are conducting research on how farmers can use data collected by drones to improve crops. Photo by Sean Meachum, MSU GRI.
Data collected by drones is already helping farmers. Drones can offer a perspective heretofore unavailable and the MSU project seeks to rapidly analyze the data.

"A lot of producers are using drones to go out and look at their crops," Moorhead explained. "Now, researchers are starting to use it and try to understand how a crop is progressing, such as whether more fertilizing is helping and whether it is producing more fruit."

Drones provide images that can be processed into one large image that offers something akin to a satellite image, Moorhead said. Comparisons can be made week to week. The GRI's work involves training on how to use the images, and to eliminate images that are oblique or have cloud cover.

Moorhead said researchers are trying to determine the ultimate benefits for farmers. Computers have advanced to the point that soon farmers, or consultants, will be able to take images, send them to the cloud, and receive answers to issues including pest infestation, water problems or chemical problems.

"In that area, hopefully, we are going to be developing some algorithms and procedures that right now take a good bit of computer power," Moorhead said. "When you think about the fact that the technology that sent up the first space shuttle was available in handheld computers about 10 years later, you can see the potential power. It's going to eventually be localized. It's not going to require a big computing center somewhere to get this information. It could be available anywhere." 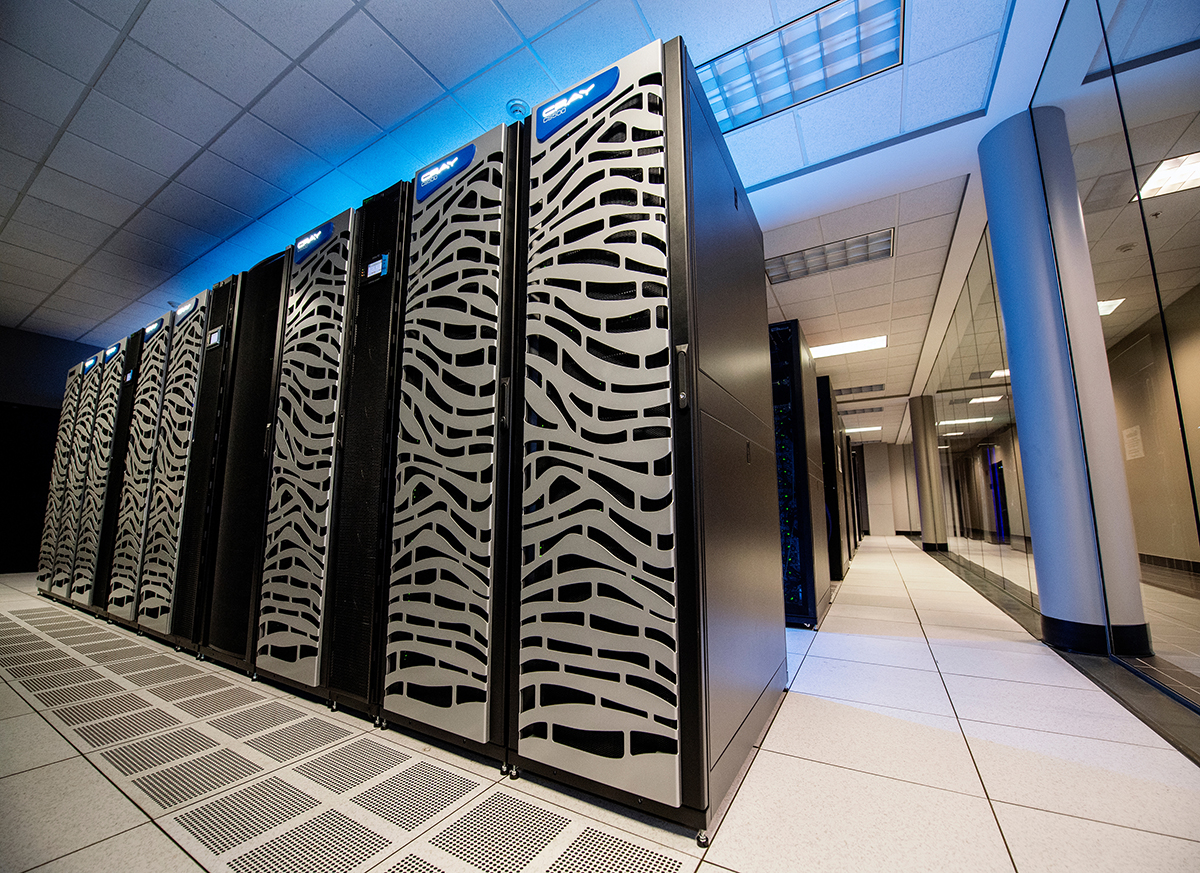 The partnership is powered by Atlas, a high-powered system installed at MSU's High Performance Computing Collaboratory in 2020. Photo by Megan Bean, MSU OPA.
If pests are the main concern, drones can fly low enough to get good enough resolution to see them close up. Moorhead said they can be found quickly, allowing farmers to deploy a timely pesticide application. "You are not waiting on a satellite image. You're not waiting for someone to walk through the field. You are getting an overview of the field."

Another potential benefit, Moorhead said, is studying different winter ground cover to determine whether to use radishes, clover, peas or none. Field trials with farmers are underway. Researchers are also investigating how to improve conservation practices, such as reducing runoff.

Farmers are increasingly embracing drone technology, but Moorhead said an issue now is who owns the data.

"Farmers would like to collect data and develop data products, but they aren't generally confident that their data is protected. They'd like to know more about working with large-scale vendors to get data, but they are leery of their data getting used by someone else. If I think I'm getting a pretty good deal on the land I'm leasing, I don't want anyone else to know that."

Weather is a major component of the research. Moorhead said they have determined that in Mississippi, only 10% of the growing season is cloud-free days. That changes things in terms of being able to predict how much crops are changing week to week. Also, drones can't fly in bad weather. All drones have a problem if there is more than a quarter inch of rain in an hour.

Assisting the research this year is Alessandro Matese, a visiting scholar from Italy. Matese, a renowned researcher at the Institute of BioEconomy at Italy's National Research Council, is taking part in a year-long fellowship through MSU's partnership with the USDA. Matese is a proponent of applying aspects of computer science to agriculture.

"I have found a good opportunity for collaboration here, and the opportunity to improve my knowledge of computer science related to agriculture purposes," he said.

Matese hopes to meet with area farmers in the coming months. Such an experience will broaden his overall knowledge base, he said. Matese is based in the wine region of Tuscany and most of his experience relates to grape cultivation.

"Here, there are different types of crops that I am very interested in," he said. "For example, cotton is a crop that we have never seen in Italy. I would like to meet some farmers to enlarge my knowledge of crops."
Real-time functionality

"At this point, the farmer has to go out with a drone, or a consultant goes out, and they have to send the data somewhere to be processed," Moorhead said. "This is very time consuming. I see the process in the future becoming much more real-time. You are able to eliminate pests much quicker before they can destroy a crop. You are able to react immediately."

Moorhead envisions a future where farmers will eventually be able to program drones from their homes, directing them where to go. The drones will come back automatically to a recharging station. Data will download automatically to let the farmer know if there is an issue.

"You will save money by knowing exactly what your fertilizing needs are," Moorhead said. "It will be able to predict yields much earlier, affecting commodities pricing more assuredly."

One of Matese's observations so far is the Mississippi State program offers an approach to processing data different than what he experienced in Italy.

"There is a huge amount of knowledge available in computer science," he said. "It has opened up a new vision, shown me new tools, new ways of relating computers to agriculture. It's a very good organization in terms of teamwork. Each person has a specific task, and it's amazing for me to see how things work together. It's a new reality."

Matese said he is acquiring valuable knowledge to take back to Italy.

"I have colleagues here with a very high level of expertise," he said. "It's not so common to find people with an interest in both computer science and agriculture. Another thing I will bring back will be the way the team is structured here in the U.S. It is very effective. Every person knows their tasks very well, and if there is a problem, everyone is able to ask someone else for help and support."