Clearwater Consultants Inc, an environmental and civil engineering firm, was tasked with extending the Louisville Airport runway in northeast Mississippi. Following the extension, they wanted to verify that the slopes were correct and matched the model established in the planning stages of the project. Typically, this would involve a survey crew collecting GPS points on a 50-to-100-foot grid, which would not only be time-consuming but would not accurately represent the surface. 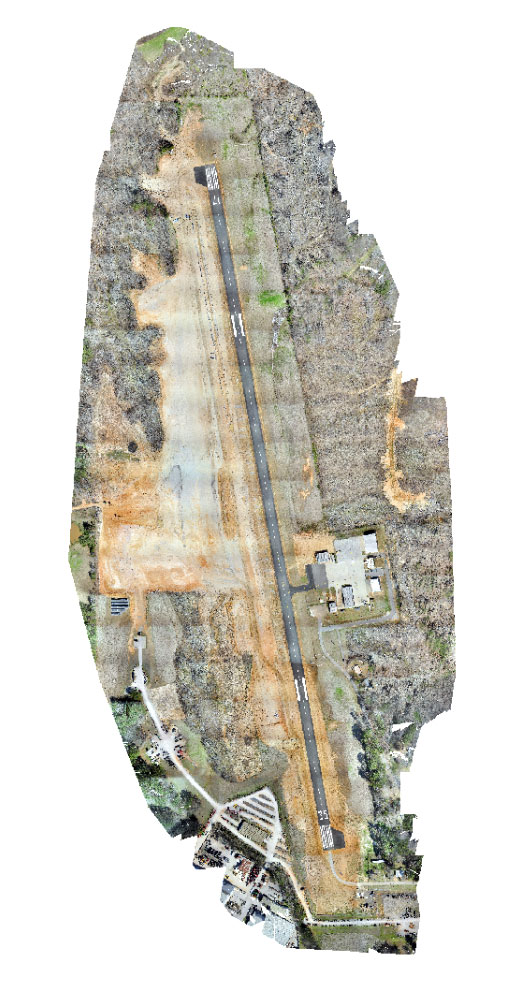 Image by Daniel McCraine, GRI researcher and UAS pilot, using TrueView Sensor
"We were specifically looking for a UAV-mounted LiDAR system that would produce accurate and dense georeferenced point clouds," said McCraine. "We needed something that would allow us to model the ground surface far more densely than the 50-to-100-foot grid."

They found what they were looking for in the TrueViewÃƒÆ'Ã'Â¢"Ãƒ'Ã'Â¢ 410. Data was collected using the 410 mounted on a DJI Matrice 600 UAV. Since most of the area was bare ground or sparse grass, they were able to collect a bit faster than the recommended five meters. In areas where more point density was needed, they slowed to get adequate canopy penetration.

All 200 acres were mapped in less than five hours. And instead of collecting a single point every 50 to 100 feet, the team was able to achieve roughly 10 points per square foot. This greater point density allowed the project managers to have a far more accurate representation of the terrain and all its varying features. After collecting the data, McCraine used GeoCue's LP360 software to process the data.

"The software is very intuitive and works well for numerous applications. Classification of the point cloud is a breeze with the automated tools and requires minimum manual clean-up," said McCraine. "I've seen other sensors that were very robust at collecting data but required a decent amount of data analysis in a third-party software or coding experience to extract meaningful information. GeoCue's solution has both!" Recently, GRI purchased the TrueView 515 sensor and is looking to use it and the LP360 software for future similar projects.

GRI, Mississippi State University's Geosystems Research Institute, is a collaborative of academic scientists, engineers, and stakeholders active in conducting and coordinating research using geospatial technologies and resource management to advance knowledge and practice in earth and its systems to improve policy and public awareness.