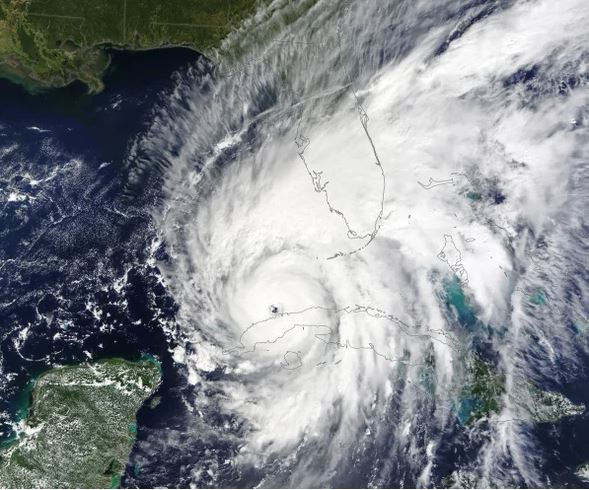 After making landfall in western Cuba on September 27 as a category-3 storm, Hurricane Ian entered the Gulf of Mexico with a trajectory aimed at Florida. Credit: NASA Earth Observatory image by Lauren Dauphin, using MODIS data from NASA EOSDIS LANCE and GIBS/Worldview
For nearly two months, the Atlantic had no hurricane activity. Then September arrived with a flurry of storms.

Hurricane activity in the Atlantic Ocean typically begins to ramp up in earnest around mid-August. But at that time this year, there wasn't a storm to be seen anywhere across that vast stretch of ocean. Those quiet weeks capped off a nearly two-month lull that had forecasters scratching their heads after initial predictions of a busy season. "It was really, really dead. We had no storms in August, which was the first time since 1997," when a very strong El Nino cut off hurricane activity, says Phil Klotzbach, a hurricane researcher at Colorado State University, who issues a seasonal forecast.

But by the end of September, it seemed like a switch was suddenly flipped. Four named storms formed within nine days, and two of them—Fiona and Ian—became destructive major hurricanes. The 2022 hurricane season's 180-degree turn provides an object lesson in the competing influences that can either keep a lid on storm formation in the Atlantic or turn the region into what Klotzbach calls a "powder keg."

Before the official June 1 start of the current season, several forecasting groups, including Klotzbach's, predicted more storm activity than the average season (though not as much of a blockbuster as occurred in 2020, which ran through its available hurricane names and into a backup list of Greek letters). Two large-scale patterns were favorable to storm formation: abundant warm ocean water in the Atlantic Ocean and a La Nina event in the Pacific. During a La Nina, warm waters in the tropical Pacific shift westward, which changes patterns of circulation in the atmosphere above. This has ripple effects around the world. In the Atlantic, it means a more unstable atmosphere and less vertical wind shear (in which winds blow at different speeds and directions at different elevations in the atmosphere), factors that are favorable to the convection that drives a hurricane.

One storm formed in early June, and two more briefly spun up in early July. Then all was quiet until Tropical Storm Danielle formed on September 1. The long period of quiescence came from shorter-term factors that, for a time, outweighed the more conducive conditions. In particular, dry air flowing into the tropics from more northerly latitudes and the Sahara Desert starved the low-pressure systems, technically called "tropical waves," that roll off the western coast of Africa and become the seeds of many tropical storms. "You'd have waves and some activity over the central Atlantic, healthy-looking things coming off of Africa, and they just wouldn't make it. It would just be time after time of 'Nope, nothing to look at here,'" says Brian McNoldy, a hurricane researcher at the University of Miami Rosenstiel School of Marine, Atmospheric, and Earth Science.

That dry air—and, in the case of the Sahara, dust—is often present earlier in the season, but there seemed to be more of it this year. "In this particular season, it looks like the air from the Sahara was able to get pushed farther south than average because of all of this waviness" in the jet stream, the west-to-east river of air in the atmosphere, says Kim Wood, a tropical meteorologist at Mississippi State University. Saharan dust can curtail activity because it absorbs solar energy, warming the higher portions of the atmosphere and making them more stable and therefore less conducive to storms, she says.

Those drier conditions lasted longer into August this year than they typically would. But by the end of the month, they were receding, and the influences of La Nina and abundant warm ocean water were beginning to assert themselves. "There's a lot of untapped rocket fuel," Klotzbach says of the waters that have spent all summer absorbing the sun's rays. Like Danielle, Tropical Storm Earl formed at the beginning of September, and both soon strengthened to hurricane status. And then, after a few more days of quiet after those storms weakened, Fiona formed and marked the beginning of a flurry of activity.

Fiona deluged Puerto Rico and again knocked out power on the island before finally slamming into Atlantic Canada, where it destroyed homes and left more than 500,000 customers without power. After Fiona came Gaston, followed closely by Hermine and then Ian, which rapidly intensified into a major hurricane and plowed into the Gulf Coast of Florida on Wednesday.

September is typically the peak of the hurricane season, so it is not surprising that this activity is taking off now. But it remains to be seen if the season will ultimately live up to the forecasts of higher-than-average activity. "It's just we are climatologically running out of time since we are at the peak of the season and entering the period when activity tends to decrease," Wood says. "We have seen past seasons, unfortunately, like 2020, where there was a lot of activity in October and November. That doesn't mean we're going to see that here. But it is within the realm of possibility because the water is so warm, because waves are continuing to come off of Africa."

A slow season followed by an onslaught of storms has happened before. For example, "1961 was the other year that had no named storms in August, and it ended up a hyperactive season," Klotzbach says. That "September was bonkers. And then October and November were really busy."

That possibility is particularly a concern for Florida. "On average, historically, the most active month for hurricanes in South Florida is October," McNoldy says. "Just because it's been quiet doesn't mean it's over."