Publications at the HPC² 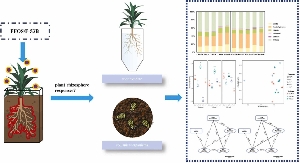 Chlorinated polyfluoroalkyl ether sulfonate (F-53B) and perfluorooctanesulfonate (PFOS) are used and emitted as fog inhibitors in the chromium plating industry, and they are widely detected worldwide. To study the effects of F-53B and PFOS on the rhizosphere defense system, they were added at two levels (0.1 and 50 mg L-1) to the soil where different plants (Lythrum salicaria and Phragmites communis) were grown. In bulk soils, high concentrations of F-53B/PFOS resulted in significant increases in soil pH, NH4+-N, and NO3--N (the effect of PFOS on NO3--N was not significant). Moreover, the extent of the effects of PFOS and F-53B on the physicochemical properties of bulk soils were different (e.g., PFOS caused an increase of NH4+-N by 8.94%-45.97% compared to 1.63%-25.20% for F-53B). Root exudates and PFASs together influenced the physicochemical properties of rhizosphere soils (e.g., TOC increased significantly in contaminated rhizosphere soils but did not change in non-bulk soils). Under the influence of F-53B/PFOS, the root exudates regulated by plants were changed and weakened the effect of F-53B/PFOS on microbial community of rhizosphere soil. The rhizosphere defense systems of different plants have both similarities and differences in response to different substances and concentrations.