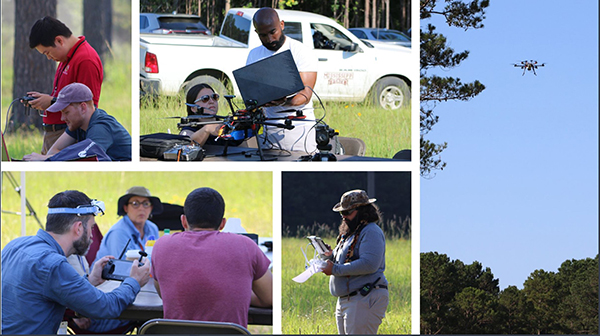 The competition was hosted by the U.S. Department of Commerce's National Institute of Standards and Technology; it featured the advances in drone technology. Competitors put their best bot forward to try and capture the judges' attention.

"We have really great capabilities and if we don't get it this year we are definitely coming back next year. We learn from our mistakes, we learn from experience and we're ready," said participant Kristain Koons.

Members from Mississippi State and Kansas State University teamed up to bring their yearlong work to fruition. Students and other licensed drone pilots participated in a four-part challenge to see whose drone could outperform the others finding different objects or people.

"That's really what this is all about, helping those who can help us eventually when we need it the most eventually and this is to push that technology into their hands when us or somebody else, we love is lost or incapacitated, this is hopefully going to help them find them faster," said competition program manager Kurt Barnhart.

Barnhart and director of Flight Research, Tom Brooks, knew that the competition was good for participants and local law enforcement.

"These competitions are vital to stoke the fires of innovation and creativity. Some of the engineers and technologist that are competing today have some exciting ideas and more over they're really passionate about bringing the technology and things they can contribute to our first responder community," said Brooks.

First responders had their own separate challenge going on where they showcased their skills of using the drones, plus learning more of the importance drones have to helping the community.

"We have always been a technology driven department and drones are really cost effective in the different situations that we can use them. They've proven their worth in not only the law enforcement community but in industries all over the world," said Starkville police officer Robert Eguires.

More than 700 thousand dollars in prizes will be awarded during the competition and the winner's drone will be what departments will be encouraged to use.