NGI collaborative research with NOAA's Atlantic Oceanographic and Meteorological Laboratory, located in Miami, Florida, is providing water quality assessments to improve the understanding of the ecology of Biscayne Bay and its relationship to the associated watershed. The news story, "How Biscayne Bay Reached its 'Tipping Point,'" was featured on Miami's South Florida, NBC News Channel 6.

In early Aug., videos showing hundreds of dead fish washing up near the Venetian Causeway in Miami began circulating online.

The fish were coming from the area's most iconic body of water, Biscayne Bay.

Preliminary investigations found that a combination of low oxygen levels in parts of the water, along with high water temperatures caused the weeklong fish kill.

However, scientists say the tidal wave of dead fish was a symptom of a larger issue the bay has been experiencing for decades.

For years, scientists have been claiming that Biscayne Bay has reached its "tipping point." A 2019 study done by the National Oceanic and Atmospheric Administration described that "tipping point" as an environmental "regime change."

The study looked at water quality in the bay from 1995 to 2014 and found levels of chlorophyll and phosphorus were increasing. What that meant was the lush beds of seagrass Biscayne Bay was known for were slowly dying off due to pollution and algal blooms, which absorb sunlight and suffocate all living things in the water.

However, Biscayne Bay was not always on the verge of a "regime change." There was a time when it did not even exist.

Thousands of years ago, Florida's landmass was twice the size it is today. When glaciers melted and sea levels rose across the globe, the coastline receded and an estuary in South Florida was created.

That body of water, which was later named Biscayne Bay, became part of a larger ecosystem that naturally filtered out nutrients through marshes. 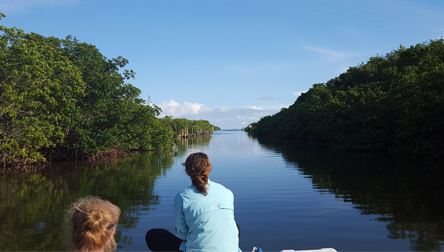 At the turn of the 20th century, settlers and developers slowly made their way down the peninsula. South Florida's coast was seen as prime real estate. In order to build on top of the swampy river of grass, water had to be drained and redirected through canals, immediately affecting the ecosystem's ability to filter out nutrients.

Altering the path of Florida's water flow was just the beginning though. As soon the land was stable enough to build on, South Florida underwent mass development which led to a reliance on infrastructure that has since become outdated.

"What’s happening is the greater Miami area has grown and grown faster than we can keep up with our infrastructure," Todd Crowl, executive director of Florida International University's Institute of Environment, says.

"The sewer system, the storm drainage system, the fact that we have whole towns still on septic tank systems," Crowl says.

Septic tanks have drawn the ire of many scientists who have studied Biscayne Bay's health.

Sitting just beneath many people's homes in Miami-Dade County are tanks filled with waste. When they were first installed, the county believed the area's large bedrock of limestone would be the perfect place to store people's waste. The tanks were built above Miami-Dade's groundwater which led to the region's water supply.

Due to sea level rise that groundwater has risen and waste filled with nutrients, like phosphorous, is now entering the county's aquifer untreated.

There are over 100,000 septic tanks in Miami-Dade - a large portion of which are near or around Biscayne Bay. Back in 2018, the county reported that in 20 years over 60% of those septic tanks will malfunction.

"You cannot have a high density of septic systems that close to a bay and expect to not get these kinds of issues," Crowl says.

A recent report by Miami-Dade's Biscayne Bay Task Force recommended massive infrastructure projects to curb the ongoing pollution, including connecting thousands of those homes to a sewer system.

It would cost the county billions of dollars to convert hundreds-of-thousands to a sewer system, but it's just one of many prices scientists say the region will have to pay in order to prevent another weeklong fish kill from becoming a yearly occurrence.