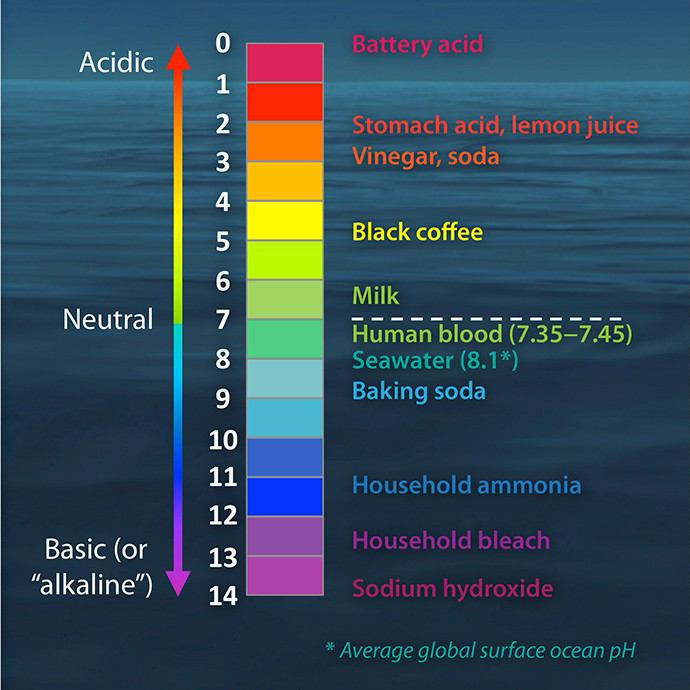 The pH scale indicates the concentration of hydrogen ions in a solution. It works in an inverse way such that the higher the concentration of hydrogen ions, the more acidic and the lower the pH value will be. The lower end of the scale is acidic, and the higher end of the scale is basic or alkaline. Photo by NOAA Pacific Marine Environmental Laboratory
A new study by scientists at NOAA's Atlantic Oceanographic and Meteorological Laboratory (AOML) and Northern Gulf Institute (NGI) has revealed the alkalinity of river runoff to be a crucial factor for slowing the pace of ocean acidification along the Gulf of Mexico's northern coast. This valuable, first-time finding may be indicative of ocean carbon chemistry patterns for other U.S. coastal areas significantly connected to rivers.

Ocean acidification refers to a reduction in seawater pH over time, mainly caused by increased levels of carbon dioxide in the atmosphere being absorbed into the ocean. Seawater chemically reacts with carbon dioxide to form carbonic acid, causing the ocean to become more acidic. 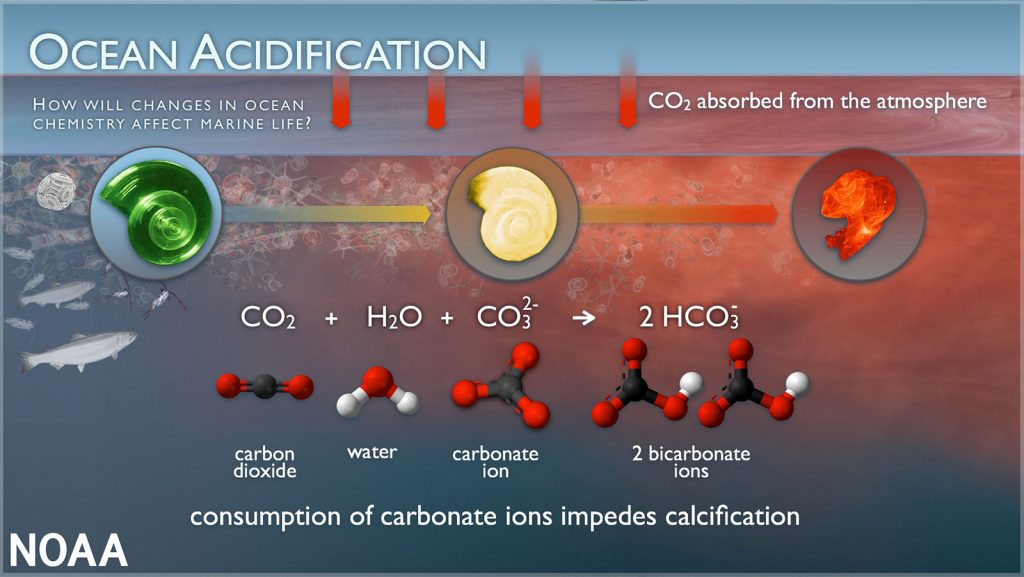 This image shows a pteropod shell dissolving over time in seawater with a lower pH. When carbon dioxide is absorbed by the ocean from the atmosphere, the chemistry of the seawater is altered and conditions become more acidic. Photo by NOAA
These changes in ocean chemistry negatively impact marine species such as corals and shellfish by impairing their ability to grow and survive. As the ocean's pH level decreases, there is also a reduction in the aragonite saturation state, i.e., the water conditions that will more likely dissolve calcium carbonate, one of the materials used by shells and coral skeletons to form their structure.

Corals and shellfish need a higher aragonite saturation state and less acidic waters, i.e., higher on the pH scale, to thrive. If waters become too acidic, less coral reef habitat will be available for fish and other reef-dwelling animals, diminishing biodiversity and marine ecosystem health.

The Mississippi River has a relatively high level of alkalinity for a freshwater body. Over recent decades, agricultural practices such as liming (adding neutralizing materials to lower soil acidity) and water quality improvements have contributed to the increased water alkalinity in the Mississippi River system. Alkalinity acts as a neutralizing factor to make a solution less acidic and more basic or alkaline. 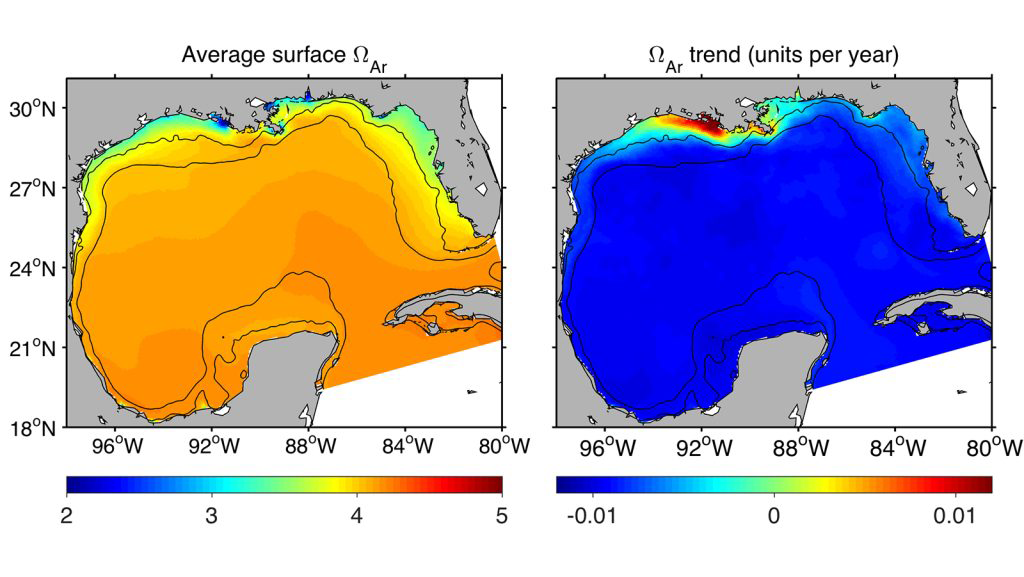 Average surface aragonite saturation state (ΩAr), an indicator for ocean acidification (left), and its long-term trend (right) showing less acidic waters (with a higher aragonite saturation state) around the northern inner-shelf of the Gulf of Mexico. This ocean acidification buffer was caused by the Mississippi-Atchafalaya River's alkaline water mixing and neutralizing the seawater in that area. Graphics by Fabian Gomez
"Our study showed that river alkalinity inputs from the Mississippi River can offset the progression of ocean acidification in northern coastal areas of the Gulf of Mexico. We can expect river alkalinity to have a similar counteracting effect on ocean acidification in other US coastal regions since the dominant pattern for US rivers is alkalinization," said Fabian Gomez, a research scientist at AOML and NGI.

Ocean acidification is a major environmental stress factor that contributes to the degradation of valuable marine resources in the gulf. A recent report by NOAA's Office of Coastal Management highlighted the economic value of the Gulf of Mexico's coastal and marine ecosystems: they support approximately 598,000 workers and are the largest contributor to America's blue economy, with an estimated $104 billion dollars coming from oil and gas production, marine shipping, and the fishing industry.

NOAA's research to better understand ocean acidification will help preserve and manage coral reefs and other marine species that gulf coastal communities depend on for fishing, tourism, and other economic drivers in the region.