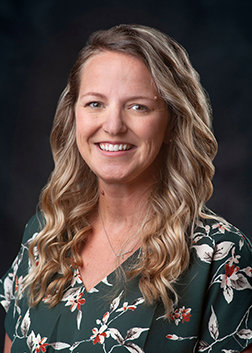 An assistant professor in the Department of Geosciences with a joint appointment to the Northern Gulf Institute, Rudzin received a certificate of achievement and a cash prize for her paper, "The Air-Sea Response During Hurricane Irma's (2017) Rapid Intensification Over the Amazon-Orinoco River Plume as Measured by Atmospheric and Oceanic Observations."

"The research in the paper examines how ocean response over the Amazon-Orinoco River plume -- or any river plume or upper ocean salinity gradient -- changes the sea surface temperature response during hurricane passage and how that affects air-sea fluxes and the atmospheric boundary layer within a strong tropical cyclone," Rudzin said.

Noting Hurricane Irma experienced rapid intensification—rapid strengthening of winds of 30 knots over a 24 hours period—over the river plume feature, Rudzin said her observations and analyses indicated the river plume's salinity gradient "slows the cooling of the sea surface temperature during hurricane passage, compared to areas that don't have the river plume, which helps the atmospheric boundary layer within the hurricane to stay warm and buoyant."

"Warm, moist, and buoyant environments help promote convection and thunderstorm activity in the tropical cyclone to facilitate intensification," Rudzin said. "The study also underscores the need for concurrent atmospheric and oceanic observations to study these processes in hurricanes."

Rudzin said winning the award validates her research as an early career scientist.

"This also brings attention to the part of research that I am very passionate about -- observing and studying the atmospheric and oceanic boundary layers concurrently," Rudzin said.

A faculty member since August, Rudzin earned her Ph.D. from the University of Miami in 2018 and her bachelor's degree from Florida State University in 2012. She was a National Research Council Postdoctoral Fellow at the Naval Research Laboratory Marine Meteorology Division from 2018-2021.

Part of MSU's College of Arts and Sciences, more information about the Department of Geosciences is available at www.geosciences.msstate.edu.